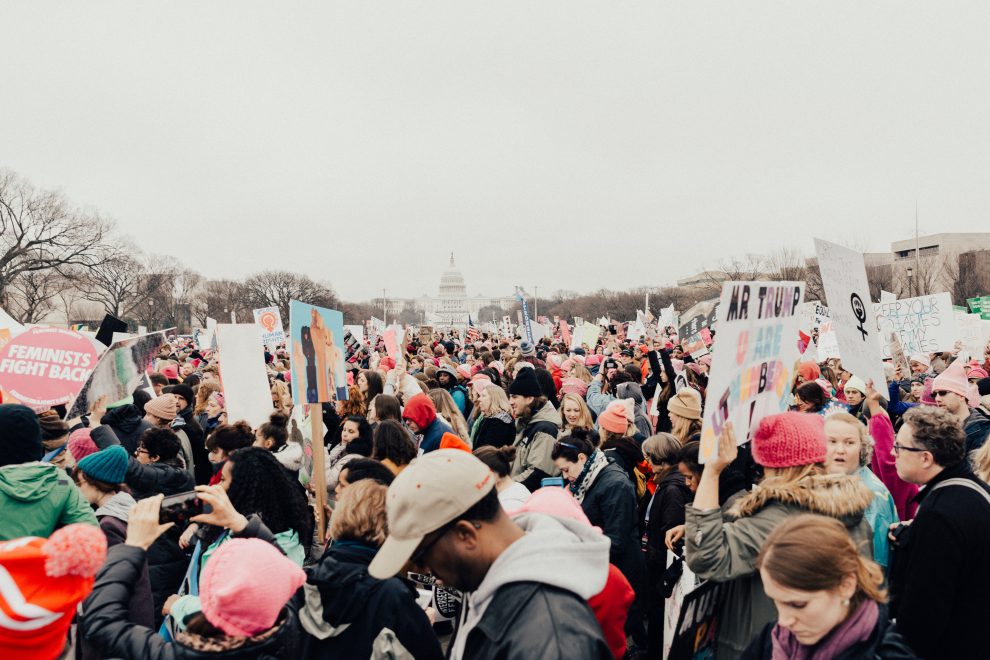 Whether medical professionals, media makers or cell towers – the new protest movement has many targets

In times of crisis, people look for scapegoats. They are used to simplify complicated relationships. Personal or general miseries are to be given a face. Whereas in the Middle Ages the outlaws were tied to the stake and burned, today they are “only” pilloried in political media. But there are also more dangerous tendencies.

After a team from the ZDF satirical program “heute show” was attacked by a group of masked men in Berlin in the late afternoon of May 1st of this year, reporter and comedian Abdelkarim Zemhoute was shocked. Several members of the team had been beaten so bad that they had to be taken to hospital. There was no apparent motive, but the police allocated the offenders to come from in the radical left-wing. This made an interpretation of the attack even more difficult. After all, the “heute show” is generally considered to be on the left of the political spectrum. Often, the motives of such acts seem to be “explainable” only by intellectual contortions. For example, that Abdelkarim and his people were to be “worked-over” for making themselves available as tokenism for a station otherwise devoted to the government. But these are only speculations; the case has not yet been resolved.

Disturbing facts seem to deliberately be ignored by the conspiracy pyromaniacs.

However, it is becoming clear that simple explanations are less and less expedient. This also poses new challenges for those responsible for security. Even at the demonstrations against the government’s measures to contain the current pandemic, the participants are motley groups. Referring to an event in Stuttgart, the news magazine “Der Spiegel” described the motley crowd of protesters: “This crowd consists of not only chronical Merkel haters or vaccination opponents, but also includes people who lost their jobs during the crisis. There are single mothers or restaurant owners who had to close their restaurant.” Losers due to current social developments, people who see their future in gloomy pictures or career pessimists form a ground for the new protest movement. In the Polish capital, more than 380 participants of the “entrepreneurs’ strike” in Warsaw’s Castle Square against government restrictions were arrested on May 16th. The political fight has long lost its contours. The often vague goals of the protesters can best be defined in terms of scapegoats.

But scapegoating needs a concept of the enemy. This can clearly be seen in the tweets of U.S. President Donald Trump, who, in the current crisis, first put the blame on China, then on his predecessor Barrack Obama, and finally on the World Health Organization. All with the intention of diverting attention from his own failures.

Even if certain contemporaries sometimes “only” unleash their rage at things, it is also aimed at people. Currently, there is a great number of arsons in Europe – allegedly – directed against transmission towers of the new 5G mobile network. Disturbing facts seem to deliberately be ignored by the conspiracy pyromaniacs. By mid-May, seventy-seven such arsons had taken place in Great Britain alone. In addition, there were attacks on 5G facilities in Italy, Ireland, Belgium and Cyprus. Even the Caucasus Republic of North Ossetia has to deal with these problems. During a press conference on May 2nd, the head of state Vyacheslav Bitarov said that the settlement of Nogir, several kilometers north of the republic’s capital, Vladikavkaz, was left without cellular service after a cell tower had been burned down by residents who feared the 5G technology. In the case of the arsons near the Cypriot port city of Limassol, representatives of the local telecommunications company CyTA suspected that the arsonists assumed that the intention was to erect the 5G facilities, which are highly controversial among the population, during the Corona restrictions, this way secretly bringing about a fait accompli.

In the UK, the head of Vodafone UK warned that lives were at risk from a “dangerous lie” regarding 5G after a mast near the NHS Nightingale Coronavirus Hospital in Birmingham had been willfully destroyed over the Easter weekend. Meanwhile, in the Netherlands, authorities have characterized the perpetrators of mast attacks as hooligans engaged in a “European championship of mast burning.” Although the actions are similar in different countries, the motivations seem to be different. Why this aversion?

The Influence of Electromagnetic Radiation

In mid-April Hanna Linderstal, managing director of Earhart Business Protection Agency, a Swedish data company that tracks online disinformation, had a chance to express her concerns to the Financial Times (FT). According to Linderstal, the first video appeared that directly linked the Coronavirus to 5G. It was posted online in early January in the form of a lecture discussing the impact of electromagnetic radiation on pandemics. “It was really scary to watch,” Linderstal said, according to the FT. Soon, she said, dozens of videos turned up showing dead birds, dead fish and people passing out in the street – all, as claimed in the videos, the result of 5G. Hanna Linderstal monitored the response of 35 of the most popular videos that appeared in January and found that they had been viewed 12.8 million times within a few weeks. However, this did not answer the question of what the breeding ground for such crude ideas is. In any case, one thing seems obvious: there must have been a significant erosion of previous values. “We are gladly ready for hero worshiping …, but if the hero does not immediately fulfill our expectations, if he does not succeed, we are willing to drop him. In modern society, it seems, authority is always temporary and on demand,” the “WirtschaftsWoche” stated a decade ago.

Economic disruptions can result in a significant increase in violence. Suicides are also subsumed under this. Economic crises and disruptions overstrain many people. Example: The East Asian economic crisis of 1997. According to “ärzteblatt.de,” a study estimated that, at that time “there were more than 10,000 additional suicides in Japan, South Korea and Hong Kong alone.” And the ARD Tagesschau reported in mid-May that “U.S. scientists warn that up to 75,000 additional Americans will die in the next few years either from alcohol or drug abuse or by suicide.” In the European Union, such trends were most evident in the new member states. These were “Bulgaria, the Czech Republic, Hungary, the three Baltic countries, Malta, Poland, Romania and Slovenia, where the suicide rate among men increased by 13.3 percent.”

The still silent majority of Germans should take a clear position against populism, xenophobia and destructiveness.

Although precise studies of the motives for increased suicides are lacking, they can be interpreted as a sign that confidence in one’s own economic situation as well as in the newly created social conditions were utterly appalling. This is one reason why so many people today follow false prophets, not to say pied pipers. Traditional political classifications seem to play less and less of a role.

But even without direct “spiritual” leaders, there are frightening developments in society that must deeply worry those responsible for security at all levels and require answers. The CEO of the Otto Group in Hamburg, Alexander Birken, expressed his concern some time ago and made it clear that German captains of industry are worried about current developments. “The terrible excesses of violence in Chemnitz,” Birken expressed in the “WirtschaftsWoche,” had left him “very concerned and brought back memories of the riots during the G20 summit in Hamburg. The angry mob, the sheer hatred and the organized destructive power of radical stormtroopers – this time from the right – triggered shockwaves around the world. The still silent majority of Germans should take a clear position against populism, xenophobia and destructiveness.”

Solidarity seems to turn into Hate and Fear

Encouragement seems to have no effects, as more and more people, whose ideas of values seem to be getting completely out of control, are ready to attack people. Hardly to be surpassed in absurdity: It hits the most important helpers, who are hailed as heroes by the majority of people, such as firefighters, medical professionals and paramedics, as well as officials, with police officers in first place.

The spectrum of those who have obviously lost their way in the current crisis is broad. While some question the restrictions ordered by the authorities and even take to the streets against them, the anxiety of others is no less scary. The “ÄrzteZeitung” wrote during the peak phase of the lockdown, “The longer the strict curfews last without a significant decrease in the numbers of infections and deaths, the more the general solidarity seems to turn into hatred and fear of being infected by healthcare personnel.” For example, the paper notes that in Spain, this is leading to a growing number of neighbors who apparently are afraid that “doctors and nurses might bring the virus into their household.” The physicians identify damages to property and verbal attacks. The helpers needed help. That’s why “the association provided nearly 200 apartments free of charge to physicians and nurses in Madrid.” However, the decrease in restrictions did not result in an ease of the situation in this country, but rather caused protests to gain speed. At the same time, politicians’ popularity ratings are dropping rapidly. Opportunistically listening to what the people say will hardly lead to defusing the conflict. It can already be said: When the bills are distributed after the end of the pandemic, the protests will once again considerably gain momentum.